When I was growing up there was no such thing in my family as not eating what was put before you, or of getting up from the table before you had finished what was on your plate. The “starving children in China” statement was applied whenever I protested. I learned to swallow pieces of liver as if they were pills, with gulps of milk. However I was unable to cope well with the frequent soft boiled eggs, and finally my mother stopped giving them to me. I have memories of sitting at the table staring at the egg in its shell in the egg cup in front of me. That was one battle I won. Not until I was an adult did I learn to like soft boiled eggs and I never did learn to appreciate liver.

My mother built her cooking around my dad’s taste, so much of what we ate was pretty standard. She believed in providing nutritious food, and though plain, it was. Despite the fact that she really didn’t like to cook, she understood that providing nourishment is an important aspect of caring that nature has built into mothers, and she did her best. All too often family members, like me as a child, do not express appreciation for the family cook’s labors in the kitchen. Though it didn’t occur to me as a child, as an adult I personally think they might be grateful someone has taken the trouble to make a meal for them to eat.

As regular readers of my column know, I have always enjoyed cooking. I find it satisfying as well as enjoyable. One aspect of this is that I prefer to prepare meals from scratch. Some might be surprised to learn I don’t own a microwave, nor do I wish to. I even like chopping food by hand rather than using a machine, peeling my fruit and vegetables, and doing all the hands on work that is required to use completely fresh ingredients rather than prepackaged ones. I do not claim that this is particularly virtuous on my part. It is simply my preference.

This is because putting myself into the meal is part of my joy in the creation of it. My energy goes directly into the chopping, the peeling, the mixing and the stirring. This is my purposeful contribution to the health and welfare of those I love and fix food for. I am fortunate to have an appreciative husband who enjoys whatever I prepare. I had one once who wasn’t and his influence on our younger children made quite a difference in what they were willing to eat. He was a meat and potatoes man and we were on a casserole budget, so complaints were often made. Yet being hungry he still ate whatever it was. 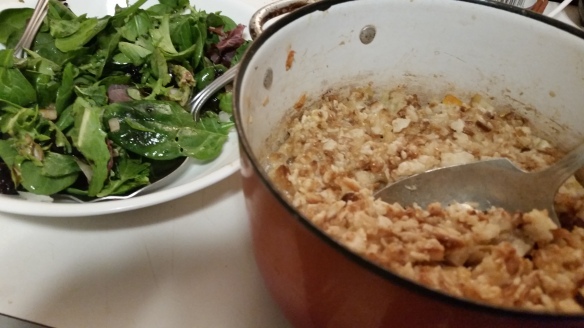 6 thoughts on “The Three Bite Rule”