I don’t remember exactly when we met; it was between fifteen and twenty years ago. What I do remember is her smile. She never failed to greet me with it–that and a wonderful warm hug. Her name was Santina Crawford. I called her the Honey Lady because that was what I bought from her, delicious local honey from the bees her husband Howard tended so well that he won prizes every year at various fairs and exhibitions. He even proudly showed me articles that were written about him in the local papers.

I brought her all my glass containers and never failed to leave without a variety of different sized jars of honey both for us to enjoy and to give away. She and her husband also sold apples. Their farm with the apple orchard and the hives is in a densely commercial area just off highway 495 in Franklin. When I first met Santina and Howard they were well along in years, and I used to worry that they’d retire and the farm would get gobbled up by a developer. As time went by, each time I would visit I would relieved that the little sign reading “Akin Bak Farm, Honey” was still there on the pole by their driveway.

Once completely rural, the land around the farm now teems with businesses. Heavy traffic zooms past on 146 at a steady rate. Several years ago her grandson, a Cornell graduate, came to help. He revived the apple business, which Howard, because of his accumulation of years could no longer manage. He even built and began a farm stand not only for the apples, but also the produce and eggs from the chickens he and his wife began to raise on the farm. Then several years ago when I visited, with tears in her eyes, Santina told me that Howard had passed away. Santina kept on handling the honey, however, her son no longer wanted my glass jars.

During my many visits over the years we would sit and chat together in her kitchen. She shared much of her background with me. Part of a large family, she grew up on the farm where she eventually lived with her husband. While she was growing up, she and her siblings worked in people’s homes and on the farm. Every year I brought home quantities of their apples, some of them heirloom varieties, all of them special. I also brought many of my friends to meet my honey lady and to purchase jars for themselves.

When I called this fall to see the best day to get some honey from my friend I was told she had passed on in August. I was shocked and saddened. If only I had gone to see her sooner! I have only one large jar left from what I didn’t know was my last visit. It is nearly finished. I hoard the special crystals of sweetness that remain. One day the last of them will be gone. Still I will enjoy thinking of her, of our conversations and most of all her tender hugs. And although the last of the honey will eventually be gone, my heart will always hold the memory of her warm and radiant smile. 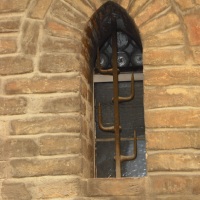