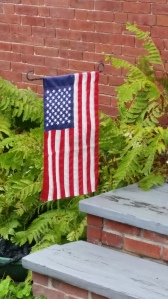 As a child I didn’t like going to birthday parties. They often played a game called musical chairs. I hope no one plays this any more. For those who haven’t, 2 rows of chairs is lined up back to back. The children march around them to music. When it stops everyone grabs a chair and sits. Each time, one chair is removed and someone is “out.” The last person who grabs the last chair wins. I never won and I thought it was a mean game. I loved celebrating my own birthday at home.

On each birthday in the family my mother would put flowers around the breakfast setting of the birthday person. There would be presents, and special food for dinner. I didn’t have many friends so instead of a party I would be taken to the movies or out for some other special treat. I made my presents for my parents’ birthdays, usually little books or a home made puzzle.

July 4th, also called Independence Day, marks the birthday of the United States of America, the day the Declaration of Independence became official. It is celebrated with gatherings, fireworks, parades and other opportunities for fun. Some might say there is too much strife and dismay to be celebrating. Terrorist attacks, murderous rampages by vicious people who take out their rage out on innocent victims, and other dismaying occurrences sadden and frighten them. Yet this is no reason not to celebrate.

When I was growing up there was a polio scare every summer. we were frightened of the beach, or other places where there were crowds. When I was in the 6th grade one of my classmates caught it and lived out his life in an iron lung. There seems always to be something to fear. Plagues in Europe, epidemics in the US, and even savage attacks by hostile tribes. When in history has there not been a threat to survival?

Every birthday reached is to be celebrated. Within the past several years too many friends of ours have died, many much too young. One never knows when there will be no more birthdays. This is all the more reason to mark each and every one as a special occasion. Young children love their birthdays. The child in us, the part that never grows up enjoys every aspect of a birthday celebration no matter how many years we accumulate. There is much to rejoice over and be thankful for in every year of life. We do well to focus on this.

Stephen was born on the 3rd. of July, and we always gather with as many friends as can make it to mark this important day. This year on his special day he will celebrate 75 years of life. A mere hundred years ago this would have been considered an tremendous accomplishment. It is, yet nowadays with good habits and good care he can expect to celebrate many more birthdays. This year when he blows out the candles on his cake he will wish not only for himself but also for his country, a peaceful, prosperous new year of life. May it be so.

1 thought on “Birthdays are for Celebrating, by Tasha Halpert”