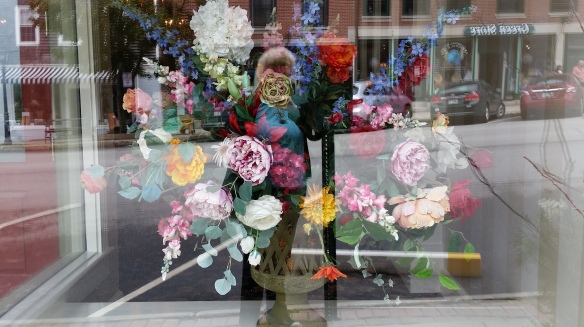 Growing up I preferred tales of adventure to almost any other kind of book with the exception of fairy stories. Biographies bored me as did many of the titles on the summer reading list. Give me a book by Robert Louis Stevenson, Jules Verne or Alexander Dumas and I was content to curl up in a comfortable spot and plunge myself into the wondrous world the author created. My own adventures were often something I got scolded or even punished for. Being a girl I was not encouraged to be adventuresome.

Recently, without meaning to, I did create myself an adventure. If I had thought about it, I wouldn’t have put the new scissors I’d found in the storage unit into the suitcase I was taking with me on my return flight. If I had put them into the checked luggage, I wouldn’t have been stopped and had my carryon opened and examined. When the security guard measured the scissors and put them back in the old red nylon suitcase that had belonged to my mother, I breathed a sigh of relief and prepared to gather my belongings. Then he took a bit of white material and ran it around the inside near the zipper.

Suddenly I was asked to take off my shoes and told I would be patted down. A female guard went over my body, informing me each time what she would be doing. Knowing I had nothing to fear, I simply allowed the experience to unfold. My daughter was worried, however we had arrived early so were in no danger of missing our flight. At one level I was laughing inside at the thought that an elderly great grandmother could be considered dangerous. However, I remained calm, knowing that giggling might not be regarded as appropriate.

Finding nothing, they asked me if I took any medication. I said no, but the suitcase had belonged to my mother. Then they mentioned nitroglycerine. I remembered that my mother had told me she took something for her heart. That cleared it all up. I got to put on my shoes and collect my belongings. Feeling relieved, I left the security area behind. Apparently even after many years in storage an old suitcase could carry traces of heart medicine and in these days of terrorist precautions come across as a threat.

My daughter and I had just spent almost two whole days processing the contents of a storage unit that had been unopened for twelve years. It contained the contents of my late mother’s art studio. We separated out a considerable amount of material that will form the basis for a retrospective exhibit to be curated by my youngest daughter, herself an artist. My mother was a professional with much art and many exhibits to her credit. If she had not shunned the limelight she might be a household word. I wondered if from her perch in heaven she looked down at my dilemma and giggled. I think it would have amused her that her adventuresome daughter had though unwittingly, created herself an adventure.

1 thought on “An Unanticipated Adventure”